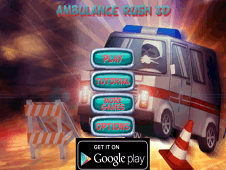 What is Ambulance Rush 3d?

Ambulance Rush 3D is a great 3D game where you will have to prove your skills in a race driver by ambulance crazy. In this game you're the driver on the ambulance, fully equipped and new, which was put to the best performing hospital in the city to intervene in emergencies maximum and you have been chosen for the post of driver. Ambulance Rush 3D is the game where you have to act very quickly, and you give first aid as soon as possible. In this game you have to give all your best to solve all the cases we have to solve. If you think this job is an easy one to know that it is not so because of the many responsablitati. Be focused on the road and when you go after the patient is in the car. Make sure you do not crash because you will start the game from the beginning. Be careful of obstacles that you emerge the other cars that might commit strange actions.

Use the arrow keys and mouse to interact.