Albert and Zoe Fighting the Beatemon 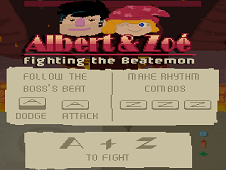 What is Albert and Zoe Fighting the Beatemon?

Albert and Zoe are two of the bravest soldiers ever possible and they are fighting in this awesome and full of adventure game against one of the most dangerous being in the world. It is so dangerous that a lot of people say that it is the Devil itself! Before of all, you have to know that our heroes from this game, the fearless Albert and Zoe are a knight and a sorcer so they can use the spells and the pure force in their fight against the Evil Beatemon, so let's hope that it will be enough! First of all, you have to know that using the A and the Z keys are going to be necessary for attacking your opponents but also for dodging so you would better make sure that everything is alright and the Devil itself, the Beatemon is going to be defeated by those brave warriors. Your fighting strategy is going to be so important because you have to prove that you are smart enough in order to kill the Beatemon with your intelligene above the force so good luck in your try and have a lot of fun while you are using all kind of weapons, especially swords, in your try to killing it!