Adventures in the World of Trolls

Trollhunters in the Hero Forge 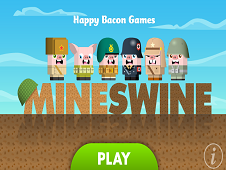 What is Mine Swine ?

Mine Swine is the best adventure and bombing game which you have ever had the honor to play. This so special game offers you the occasion to use the mouse in order to plant some bombs as close as you can to your opponent, which is going to be your enemies in the Second World War, because this game is a reconstituion of what did actually happen in that period! Your main mission will be to pick up a team, which will be a country from the Second World War and then stard adopting the best strategy for this kind of special adventure. Good luck in your try and have so much guts and intelligence and after you've picked up a country like Russia or Germany for example, you really have to plant the bombs in the right way in order to kill as many opponents as you can and try to do not die with so many pigs from your team. Watch out for those dangerous mines and have so much fun while you are trying to win this whole battle and war and you can play this game even in two players!

How to Draw Seth

FNF Cosmic but every turn a new character sings it

Down the Tubes
ADVERTISMENT