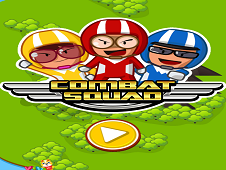 What is Combat Squad?

Combat Squad is one of the most incredible teenagers formation, which will help you get rid of the aliens once and for all. This special and so amazing game, offers you the occasion to prove that there is no other better adventurer than you so let's get to the work right now and do not stop until you finally make it done. This formation consists of some teen guys which are fighting against the aliens and their main mission is to kill them all and as they destroy them with their shooting talents, you will receive some money, some kind of coins which you have to collect as soon as it is possible. Good luck right now and avoid the aliens which are coming to you and only move your player with the mouse in order to shot them and afterwards to get out of their trajectory. Good luck for the last time and do not stop until you accomplish this game successfully so do not stop until all of them are dead and you've received an unbeatable high score. Good luck once again and become a real legend in this Combat Squad game, alongside those heroes from the Combat Squad!