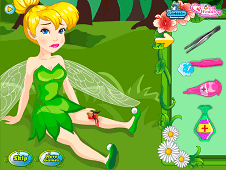 What is Tinkerbell Forest Accident?

While he was walking through the forest Tinkerbell, the fairy fly with her wings namely something special happened suddenly appeared a large tree with large branches in its path and powerful who apparently was fatal fairy Tinkerbell, reason to hit him and fell down. Chips and bark were stuck under his skin Tinkerbell on foot in the knee and now I can fly, which is why you need to put your mind to and try to pass well to all levels of difficulty being helped to heal even you who is a doctor at the beginning, but a doctor who gives his best interest so that things come out right for injured patients even if they are girls, fairies. First you'll have to remove debris from the wound chips, then to remove blood frost on foot, then disinfect the place better and eventually try to mow the wound to not infect quickly. Once you've made it healthy and have eliminated all problems will have to go with her to the salon makeover where to change their look, to give the lipstick, to dress, to do hairstyle and ii ii put all kinds of accessories.

use your mouse to help this little Tinkerbell on first aid.