At Disneyland with Barbie

Barbie and Ken a Perfect Christmas 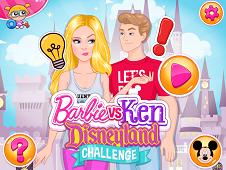 What is Barbie Vs Ken Disneyland Challenge?

Barbie and Ken are maybe the cutest and the most well looking couple you've ever seen or met and they are part from the awesome Disney animated character world so they are so proud of this. Barbie and Ken, both of them young teenagers, have decide to show off their knowledge when it comes to the Disneyland so they really want to prove that both of them are some real experts when it comes to Disneyland. First of all, you have to know that this questinaire game has two parts. First part involves the main questionaire and the second part involves picking up and decorating a souvenir from the Disneyland so let's get to the work now. In the first mission, they will get questions about the Disney world so who answers right to the most of them, wins. They will stay on two different chairs and they will have a red button in front of them so when you think that one of them know the answer, press the SPACE bar when they are selected and the red button will be pressed. Good luck and do not forget about the second task, which involves so much creativity, skills and imagination, of course!

Use the mouse, SPACE bar