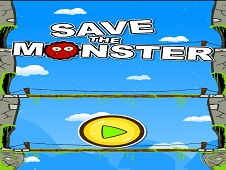 What is Save the Monster ?

Some really high bridges and not so safe for anybody are going to be the main place where this superb and so cool adventure and ability game is going to happen. First of all, you really have to know that using the mouse will be necessary for you so tap as many times as it is possible and necessary in order to jump over the rolling rocks which are coming to you. Make sure that you will make this mission possible and watch out because you won't know where the rocks are coming from until one second before you face them. Your little and red monster will get out from some caves, three caves because this game has three levels, and the monster and the rolling stone will meet at some point in the middle of the bridge. Jump over it and get in the next cave, with you can't know where it gets you but definitely in another cave but you won't know where the monster will get out from and the rolling rock will do the same so be insight. Good luck for the last time and prove that you are the best in this awesome and so cool game and show off your fantastic insight and ability!