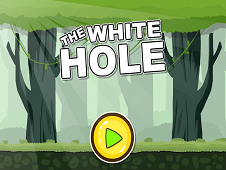 What is The White Hole?

The White Hole is definitely one of the most extraordinary and so amazing game possible, such a great and so cool ability and skills game, which challenges you to overcome your talents and abilities in order to prove that there is no other better shooting guy than you, with some invisible but still powerful bullets. There will be some little and so colorful animated characters, some jumping balls which are not that friendly as you think or they seem to be so let's stop talking about them and start killing them, because if you won't do this, your portal will be killed and destroyed by them. Use the mouse in order to shoot the fluffly characters in order to protect the portal so let's show off your skills and aptitudes right now and keep the white hole untouched, in the middle of the forest and there will also be some platforms, where could appear some monsters too. Watch out for them and kill them as soon as it is possible, collecting the coins after they are dead. Good luck once again and shoot with so many bullets in your moving targets, these moving and jumping monsters!