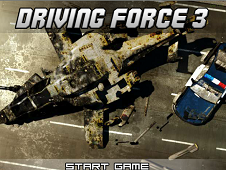 What is Driving Force 3?

Driving Force 3 challenges you to prove that you are the best driver, a real force of the driving and kill the bandits or criminals without stopping, using the machine gun you've got, using the SPACE key for unleash this rage and the power of it. First of all, you have to know that the most important thing you have to now is that now, being a part of a driving police patrol, you have to take some real responsibilities and you have to make sure that everything will be alright and you won't crash the car whatever would happen. Use the arrow keys in order to establish the direction and to keep it as the road requires from you and when you see a bandit or a criminal, shoot with your machine gun and turn on the sirens and then start the chasing mission, driving! Kill them or hurt them so bad, it doesn't matter because they deserve it and make sure that you won't damage this special patrol police car during your crazy race. Good luck for the last time and do not forget that the most important thing, which you must know is that you are a law man right now so you have to act like a real one. Good luck for the last time!