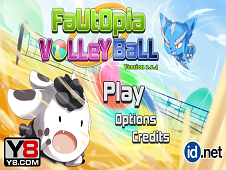 What is Fautopia Volley Ball?

The Animals from Fautopia has decided to become some real volley ball fans and athletes and they've decided that it will be cool if they would organize a competition, a kind of championship between them, where only the strongest, fastest and the most skilled and talented ones could join. Use the arrow keys in order to help them in this awesome and so cool mission. Pick up an animal and earn so many points, win all the possible matches and become the best volley ball animal player. Use the arrow keys in order to move in your territory, in your half of the pitch and use the SPACE bar in order to shoot the ball using your hands. Do not let the ball touch the ground in your pitch because this means that the opponent has just scored. Try to score more points than your opponent and the ball will be a huge colored one so you have to move faster than it. The whole action will happen next to the water because this will be beach volley, one of the most appreciate sport in the world! Make these animals some real MVPs in this sport and win competitions with your chosen one! Good luck for the last time and try to serve some hard to catch balls in your opponent's pitch!