Design With Me SuperHero Tutu Outfits 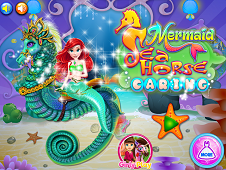 What is Mermaid Sea Horse Caring?

There is only one famous and so amazing Disney mermaid princess which you know in the whole Disney kingdom and let's guess who is she? Yes, you are right, she is the awesome red haired princess Ariel so let's find out what she has prepared for you in this brand new game, alongside her and a friend of her. She has a little aquatic animal friend from the undewater world, a little sea horse or pony, because he is so little, so he is so sick right now because he has suffered such a terrible accident under the water. Right now he is in the worst condition so Ariel, being such a helping girl mermaid as you know her, has asked from you to help this little guy recover so fast so use the mouse in order to select the medical caring and first aid instruments and tools which you will have available under the water. You won't have some real medical tools so you have to improvise some of them from what do you find there, on the bottom of the Ocean. Use some cancer's pliers in order to remove the spikes and the sharp things which have entered in this horse's body and this kind of special improvisations. Then, offer this guy a totally new dress up session, despite to fact that he is only a sea pony, removing his old saddle and giving him such a new one!