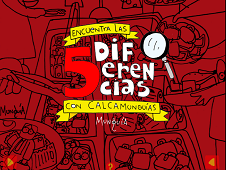 What is 5 Differences with CalcaMunguias?

5 Differences with CalcaMunguias is one of the most awesome and the most difficult at the same time insight game because this is not only a puzzle game but you have to figure it out which are the difference between the first image and the second one, both of them looking almost the same but not actually. First of all, you have to know that there will be two images per level, at least two and in different sides of the game screen. For example, in the first level of this game, you will have two images, next to each other. One of them will be in the right side and the other in the left side so you have to figure it out where are the differences between the images and there must be only 5 differences per each level. There is no limit for you for hints, but there is for amount of mistakes so try to not mistake so much and fail so many times in this special game so let's get to the work right now and have a lot of fun while you are playing this amazing, fantastic and so incredible differences game. Do not hesitate to show off your ability when it comes to recognizing little details and pay attention because there will be no pressure of time for you so all you have to do is focus! Good luck for the last time!