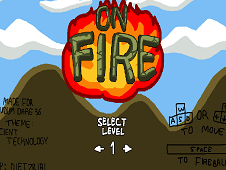 What is On Fire ?

Once upon a time, there were a lot of dumb people, at the beginning of the mankind on the Earth and one day, one of them has discovered the fire, playing with the wooden sticks and he didn't know that is that and he has just ran inside it and of course, he was on fire after this. Since them, everytime a guy starts a fire, he sacrificates himself for the rest of his primitive family and tribe so that's exactly what this guy is going to do in the following mission. Use the Arrow keys or the W, S, D, A keys in order to run over and over again and to jump as high as it is possible, running through this full of danger route and getting to the rest of the members from the tribe in the shortest time possible. Try to run next to trees or even anohter people as soon as it is possible during your road to the rest of your pimitive family and this way you will set them on fire too and this will help your survive more and more. Also, dodge the dangers which come to you and of course, make sure that you won't fall into the pits and this kind of dangers all around the route!