Moody Ally Back to School 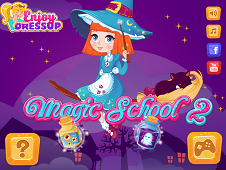 What is Magic School 2?

Magic School has just started its classes recently, just another famous schools all around the world so you have to know that this special and so cool game will offer you the second chance to play with this awesome future witch, this actually young girl who you've picked up the magical clothes not long ago for her first year at Magic School preparing, when she has received the letter which has informed her that she has been accepted. The time has passed and right now she is ready to start the second year at the same Magic School so this time you have to help her do some real spells and prepare some magical potions so use the mouse in order to rebuilt, piece by piece, the broken magical globe in the first task so this will be a puzzle game. Match the pieces next to each other and then figure it out what do you have to do anymore, in the following mission, which will be shown to you by the fixed globe! I can give you a little spoiler so you would better know that you have to try this great adventure on a magical flying groom so the third mission will involve potions and the rest it's up to you to find out what is it about!