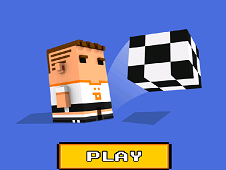 What is One More Pass?

One More Pass and the score will get higher and higher so let's get to the work right now and prove that you are the best football and soccer player possible. First of all, you have to know that using the A, S, D, W keys will be so important for you so let's get to the work right now, trying to become the best in this awesome challenge. Football players from two different teams will challenge against each other so you will control only one of them, who will always attack. Use the necessary keys in order to move, but only on the player's line because each player will play on one line. Between two lines of your players, there will be a line with a player from the opponent team so you have to pay attention in order to do not get your ball hunt by your opponent. When you reach in the final lines, next to the opponent goal where you have to score there will come the opponents next to you so you do not have unlimited time to think. Each pass will count to the score so let's get to the work right now, before there will be too late. Be the best and good luck!