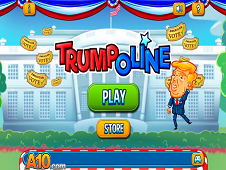 Trumpoline is definitely the greatest trampoline game possible where you have the occasion to spend this special adventure alongside this awesome future possible president of United States of America. The game is named Trumpoline because the politician Donald Trump will jump over and over again, and you have to support him in this jumping mission and do not let him fall from the trampoline in the end. This is not going to be an easy mission so you have to focus on keeping your balance and there will be joining you some political opponents of Donald which want to get him off the trampoline. Using the arrow keys, you have to maintain him up there collecting some tickets which are necessary from time to time so let's get to the work right now before there will be too late. Make sure that you won't fall and destroy all your enemies as soon as it is possible. Show off your talents, skills and abilities and make Donald right in front of the White House, to keep the jumping on. Watch out in order to do not get fired by Donald, who has hired you for this special mission!