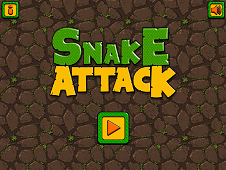 What is Snake Attack?

Snake Attack is the ultimate version of the Snake online game, such a great and so amazing adventure where you have the occasion to use the arrow keys in order to move your snake and make him reach wherever it's necessary and for this you have to conquer all the giants other snakes from this game, which want to eat you in order to make them grow. This time, in this amazing game, your snake could be touched or could touch another opponents, bigger snakes, but not their mouths, because if they touches your head with their mouths, you are done and they've eaten you so avoid, collect and grown, these are the three simple rules of this amazing game. Do not disappoint and collect all the fruits which will be necessary for your snake to grow. Crash onto the borders because this is not going to mean the end for you in this game in contrast to another snake versions and you can even touch your tail too. Good luck and have a lot of fun while you are playing the latest version of the classical snake, named the Snake attack and become the greatest adventurer when it comes to this amazing and so cool game. Show off your skills, talents and abilities and prove that you are the greatest!