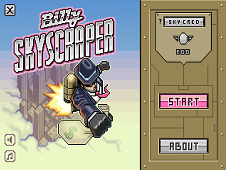 What is Billy Skyscraper ?

Billy Skyscraper is such a dangerous guy but so powerful too but do not worry, because he works for the good's sake so if you are a good guy, you're safe. However, he has many more other concerns, much more important than the fight between good or bad, because his employer has asked him to do a kind of crime, but in order to get some stolen money and bring them back from where they belong. Billy has the power to fly using a jetpack so do not crash onto the high buildins, because the whole acition will happen up there, above each roof of the highest buildings in the world so let's get to the work right now. Sometimes, you have to break the window of the buildings in order to get there, in the middle of the storekeeper and steal back the money but also avoid crashing onto some steel boxes or anything else because this will instantly kill you too. Good luck and run, avoid and attack when it is necessary but the most importnat things are to do not get caught and of course, to get all the money as soon as it is possible. Good luck and prove that you are the greatest!