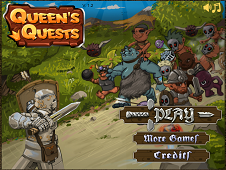 What is Queen Quests?

Queen's Quests is definitely one of the greatest and so cool ability game possible so let's get to the work right now, trying to show off your ablities and shooting aptitudes. Before there will be too late, shoot all the opponents which are coming from the front of the game screen, which are trying to stop your brave knight for your quest to rescue the princess who really needs your help. There will be a lot of green trolls faces and characters and not only green, because some red hearts, which will help your increase your power and health, will be also next to the trolls. There will be a bounching ball and you have to launch it successfully and it will bounch permanently, or at least you have to keep it bounching. Your knight will be in the bottom side of the game screen and from the upside, there will come to you your enemies. Bounch the ball and if you touch any of them, they will instantly die so make sure that you will kill all of them with no problem, and collect the bonuses. Good luck and pay close attention to this fantastic and so cool shooting game, with this amazing knight, who is so brave and powerful. Kill enemies by bounching the steel ball and keep it bounching over and over again!