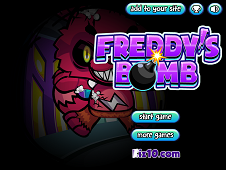 What is Freddy Bomb?

Freddy's Bomb is such a great and so cool bombing game, where these kids, are special trained in order to kill as many other kids as it is possible, during the Halloween night so this is definitely going to be the spookiest adventure ever. First of all, you have to know that using the arrow keys will be so important for you so let's get to the work right now and prove that you've got the best skills and abilities when it comes to this special bombing game, so using the mouse, you will move with your chosen and customized character by you and when you've found a perfect spot, which will help you unlock the other paths, place the bomb and then run away in order to do not get burnt with your own bomb, because this would meant that you will got ash and that's all. Freddy's bomb is a kind of challenge so make sure that you will blow up as many kids as it is possible and watch out because the whole map from this game will be in dark so only a little side where are you will be lighted so the monsters, which are actually another kids, could appear suddenly in your face and bomb you before you even have the opportunity to catch them. Good luck once again and make it happen!