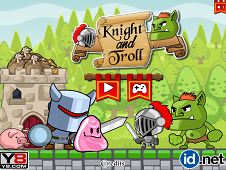 What is Knight and Troll ?

Knight and Troll is definitely one of the most incredible and so cool ability and adventure game, which offers you the occasion to use the arrow keys and the W, S, D, A keys in order to control this knight and this troll in order to accomplish successfully the tasks from this game, defeating their common enemies together and with no problem! Before of all, you have to know that they must fight and work together, due to fact that there will be some enemies which could be taken down only by both of them, each of them using their customized skills and abilities. For example, the troll will take care of the pigs and his brave friend, the knight, will take care successfully of another things. The diamonds and gems must be collected by both of them, at the same time or who is closer, it doesn't matter so at the final gate, which indicates the end of the level, must appear both of them and only this way they can cross it. Good luck and have a lot of fun while you are playing this incredible game and help each other in this two players adventure because for example the troll can't jump so high so he will be waited by the knight and this kind of important stuff!