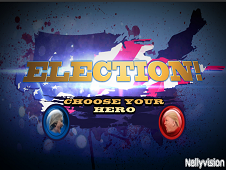 What is Election Fighting?

Election Fighting is definitely one of the most incredible, cool and so awesome game, which imvolves fighting and this kind of special adventure, but not a simple one, but an election one! Yes, you've heard so well, so the politicians have got rid of their ways and they've gotten to the attack, literally! What election campaign when you can get an election fight? Of course, when I talk about the Election Campaign, I mean the great Election Campaign from the last couple of years, for the title of the future President of the United States of America, between Hillary Clinton and Donald Trump. You must have a favourite so pick up your favourite and then beat up the other one until it finally gives up and it drops, because your opponent will be a kind of ragdoll, but made of straw. This is not going to be easy, because your opponent's endurance is going to be so high, it doesn't matter which character do you choose. So after you've passed from the straw doll challenge and picked up the right fighting clothes, get to the real fight in front of the White House! Use the arrow keys and the SPACE bar in order to block the moves and to attack make sure you will win, watching your lives in the upside corners of the game screen!