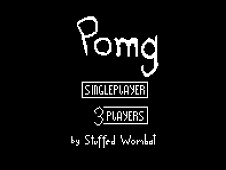 Pomg is such a beautiful and so amazing ability and arcade game, from old times, which offers you the occasion to feel some real adrenaline and the feeling which have been felt by your parents maybe while they were playing this fantastic and so amazing arcade game, where the main goal is to get with your pomg ball through some obstacles and a barries, thing which isn't going to be so easy, due to fact that you have to prove that you've got some really impressive skills, because the gates you will meet won't be offered to you only this way, but you have to work so hard for them. At the beginning of the game, you can selet which kind of game you wanna play, so pick up from singleplayer mode or 3 players mode, anything you would pick up, will matter so make sure you won't miss this occasion. There will be some moving geometrical shapes which will be against you, trying to stop you all the time from achieving the next level of the game. Try to rise above them and do not forget that it is so important for you so press the SPACE bar, because this way the ball will change its direction and its trajectory, trying to fool the moving shapes but they will be smart too!

Use the SPACE BAR