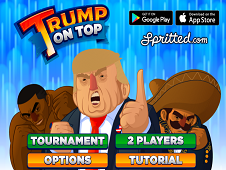 What is Trump on Top?

Trump on Top is definitely one of the most extraordinary, cool and so incredible challenge which helps you fight against Donald Trump, the latest chosen President of the United States of America or with him, against another opponents. The main thing you have to know is that anyone you would pick, there will be a terrifying battle between you and your opponent so select the tournament mode for single player selection and 2 players for playing alongside a friend! Then, you must select your fighter and then let's get this fight ready right now, using the arrow keys in order to accomplish a tutorial firstly and then to play the game itself, which consists of smashing your opponent's head to the floor as soon as it is possible, and without getting your crashed. In the besides of the fighting ring, there will be some spikes or something sharp which will make damages too so this could be an opportunity for you too. Good luck and fight Trump, alongside or against him but make sure that you won't run out of HP, which will be shown to you in the upside of the game screen, and your opponent too, in both sides. Good luck and prove that you are the best!