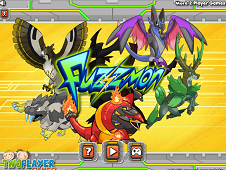 Versus CPU, 2 Players, Survival Mode or Arena fight are the four modes of this game you could successfully pick in order to have the greatest fight of your life! First of all, you have to know that the movement won't be so important for you in this fantastic game, but the ability of getting defended and to attack as powerful as it is possible, because in this game, each player will have his chance, in a row, in order to attack so the most powerful attacker will be the winner but while you are preparing your defense, you could adopt a great strategy in order to be just a little bit touched by your opponents, thing which will help you keep your amount or life, available in the up side of the game screen, intact for as long time as it is possible. Go for it right now and prove that you've got the necessary skills for this robots monster fighting game and try all the four modes from this game, fighting in different ways. Good luck for the last time and prove that you've got all the necessary fighting skills in this robot adventure game so prove that you are so incredible and fast in your moves and use the Z and X keys in order to attack or defend your choosen robot!

Use the Z, X keys