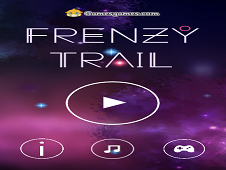 What is Frenzy Trail?

Frenzy Trial is such a great and so cool game, which offers you the occasion to use the mouse in order to catch the ball in the circles, which will be situated in some different points of the map. The map which is so necessary will be a square, with its lines yellow so the circles on its line will be more than one after you advance in the levels so make sure that you will catch all the sparkling balls in the right time. Actually, it will be a single ball, spinning one and sparkling which will shine over and over again. It will get with such a big speed through the black circles situated at some lines in the surface of the square. This isn't going to be easy at all because you have to surprise the right moment when the rolling and sparkling dot will be in the circle. Try to catch it with so much accuracy, so at least when it will be just a little bit in the surface of the circle and if you want to get a great high score, impossible to be beaten, you should catch the greatest accuracy, clicking on the circle when the shining dot is right in the middle of it! You have to act with so much speed, as the dot will be!