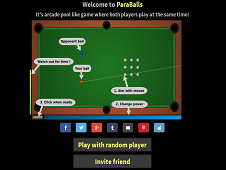 I guess you've ever heard of played Billiards, one of the most incredible game possible and this fantastic sport requires from you so much accuracy, skills and of course, abilities because not everybody has the necessary aiming talents and skills in order to aim and shot the white ball after the coloured ones in order to get them into the wholes. In this fantastic game, named Paraballs online, you will have a coloured ball, blue or red. The other 9 balls from the table, will be white, all of them so you, with your ball, have to select each time the right trajectory and to aim in order to try to shoot the white balls, getting them into the holes in the shortest time possible, thing which won't be that easy! For example, you've got the red ball so the blue one belongs to your opponent. Both of you will aim and shoot at the same time so that's the fun part, because the balls will be shot parallel so you can't know where your opponents has thought to shoot! Each white ball will have a colored trace behind it, blue or red in order to be able to see which players has touched it lately. Good luck and the goal is to score at least one more ball than your opponent! Focus and get to the work!