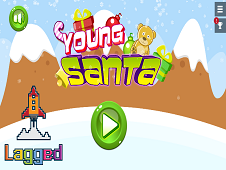 What is Young Santa?

Young Santa was such a rebel guy, breaking the rules and of course, not respecting the other opinions, thing which isn't that good for Santa Claus himself, but the things have changed and right now, he is such a great old man, generous and the idol of all the kids all around the world. This game, funny and so incredible, is about shooting with missiles all over the place in order to destroy all the possible presents which will appear to you in front of the game screen, during the game.

This mission isn't going to be easy at all, but it will definitely worth the effort so sitting on a chimney on the left side of the game screen with a kind of cannon holding in his hands, Santa will shoot over and over again the presents which will be floating in the air, but not for such a long time, because they will get down due to the gravity! In the middle side, up there, will be shown to you the time you've got until at the end of the level, and in the left side, in the up corner, there will be the score you've achieved until at the moment.

Good luck and have a lot of fun while you are playing this fantastic and so incredible shooting mission so prove that you are the best shooter ever, alongside the young Santa!