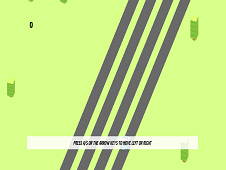 What is Reckless Drive?

As a reckless driver on a reckless highway, you have to prove that you are smart enough and of course, skilled enough in order to do not make a big confusion between overcoming the speed limit for adrenaline and your own safety! Reckless doesn't mean speed or fast only but more likely avoiding difficult situations, crashing situations with some drivers which are not as skilled as you are so let's get to the work right now and try to accomplish successfully this mission as soon as it is possible. Drive on this highway, which has four lanes, but the funny thing is that all the cars are going in the same direction so focus so much on what do you have to do, driving a Police car and avoid crashing onto some trucks and cars, which are driving so fast, by some inconsiderate drivers. Use the A or S keys in order to switch the lines in the right way and order or you can even use the arrow keys for this so let's get to the work right now, before there will be too late and make this reckless traffic be calm again! Good luck and try to avoid the crashing situations, establishing the silence and the order among these inconsiderate cars on the road!

Use the arrow keys, S, A keys