Tomb of the Universe 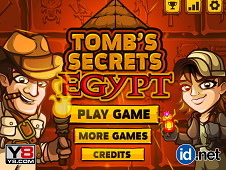 What is Tomb Secrets Egypt?

Tomb's Secrets Egypt is the fantastic story of two of the most incredible adventurers of all time, these two friends, a boy and a girl, mature ones, who are ready for the adventure of their life time! While they were exploring some kinds of rocks and materials from the ground inside of a pyramid, they've found something really awesome and awkward. The guy saw a kind of golden brick in the wall and he pressed it and then they've been throwed in some mysterious tombs, a couple of metters under the ground! Let's help them explore all of the tombs in the shortest time possible, thing which is possible only using the team work! This won't be so easy so you have to follow the right steps, as soon as it is possible for finding out the secrets of the tomb from Egypt! Face mummies and dead people, traps and this kind of special dangers only for you, avoid falling in some bottomless pits and of course, use the team work, helping each other to climb in some spaces or activating some helps as platforms for each other. Good luck and make sure that you will successfully accomplish this mission right now, alongside these super adventurers, in Egypt!