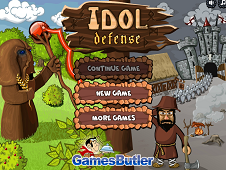 What is Idol Defense?

This is such a great game from the Ancient period of time, where a lot of kings were reigning over so many lands in the world and the most of people were 100% worship them with no exception! Actually, God wanted to be Himself the only being in the Universe who is worshiped by the people so that's why He created a great idol totem in some lands! People didn't react so well with this so one of them told king what is happening. When he heard this, the king has got so angery commanded people to destroy the totem, challenging God to a fight! Let's help God keep intact the idol totem, destroying the peasants which are trying to kill the totem because of their faith for the king and for their worship to him so use some magical powers from the upside of the game screen. The first ability you will be able to use is lighting, so kill them with it and as you advance in the levels, you will be able to upgrade your powers and spells, keeping the peasants away. Kill each wave in a row and show them that only in God they should worship! Go for it right now and become the greatest!