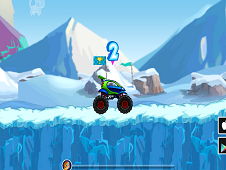 What is Nitro Heads ?

Firstly you need to complete a tutorial for this game, which is so challenging and full of advenutre and only afterwards you will be successfully ready for the greatest races, whre you have to race against some of the most powerful and toughest online opponents, all around the world! Expect jumping through some huge frozen circles, landing on a bunch of cars, sliding on the ide and floating in the air for a considerable time, making sure that you will have no other problems! Race against other players in Nitro Heads, an actual racing game with multiplayer option. Learn with the race tutorial all the controls and beat others. There are so many things which could distract you from achieving the main goal from this game but you have to take in count that there is only one! The goal is to be the first to cross the finish line, using all bonuses and possible effects that are available, such as boosts and jumping. Do not forget to use yourself so much by the boosts, as I've mentioned before and of course, prove that you are the greatest driver, controlling even your balance while you are floaring in the air, preparing for landing!