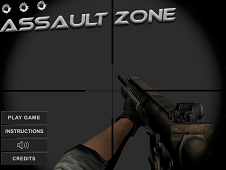 What is Assault Zone ?

Assault Zone is maybe the greatest adventure, just like Counter Strike! First of all, you have to know that using the mouse, just like in the Counter Strike, will be so necessary for you for aiming and killing all the people who you will meet in the following area, the Assault Zone, but pay attention because all of them are killers, bad guys, thieves and some of them even terrorists! In another words, they are some really dangerous men so you have to be so carefully while you are stepping there. Once you've entered there, in the middle of that chaos, you have to wait the right moment for shooting, not wasting your ammo for nothing. The opponents will be hidden all over the place, so you can't guess a single time where they will be and when, so you would better move the mouse, which will also move the cameras, in order to see in each second, where are hidden your opponents. Don't give them any chances, shooting in the chest or head! The assault zone is full of boxes, steel ones so even if you know they are hidden there, you can't do a thing until they come at the surface so be patient. After you've killed so many of them, wait for you weapon to reload and do not lose to much blood!