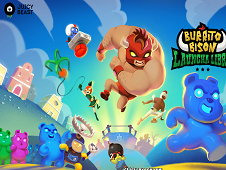 What is Burrito Bison: Launcha Libre?

Burrito Bison is the Launcha Libre World Champion so you would better not mess with this guy but if you still do this, you should apologize as fast as it is possible. These gummy bears have invaded the whole place and the town where Burrito Bison lives so that's such a big deal for him, because no one dares to invade this place, where the awesome Burrito Bison lives, Launcha Libre World Champion. So, of course, this guy won't stay just this way, without moving a finger so let's help Buritto Bison get launched over and over again, in the direction of the gummy bears in order to destroy and kill all of them successfully, at some point even using the super slam move, but only when the table in the left side of the game screen is charged enough. Good luck once again and drag with the mouse in the opposite direction where you will throw Burrito and remember that as farther it goes, as better it is! Kill them all and do not forget that after each round, with the achieved money, to make sure that you will successfully upgrade your heroe's abilities! Be inspired and put some force in your toss!