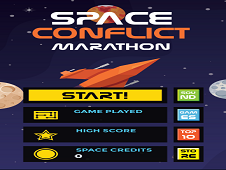 What is Space Conflict Marathon?

Space Conflict Marathon is such a great spatial adventure, whic proposes to you this fantastic mission, where you have to collect each golden circle from this game in order to get as many of them to your final score for establishing a brand new high score, impossible to be beaten. This is the only way you can solve a conflict, destroying the other side so destroy the planets and meteors which are coming to you with an increasing speed so make sure that you will successfully destroy it, using the SPACE bar in order to shoot them, but they will not disappear like this, but they will divide in many more smaller pieces, able to kill you from a crash too. Keep chasing the golden circles but at the same time, avoid getting crashed onto the white planets or meteors or onto the orange ones, which are as dangerous as the rest of them! Solve this marathon and do not forget that it is so important for you to keeping wandering there, in the space and become so satisfied with your amount of points, in this endless race and spatial conflict! Go for it right now and start shooting and collecting the necessary golden spatial bodies for a great high score!