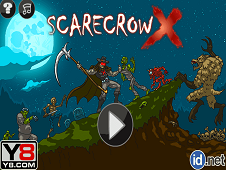 ScarecrowX is the fantastic story of an undead guy, a real hero whose ressurection means the end for the rest of the zombies all over the place! There are so many walking deads, just like him in those lands, but they are cursed and they are some zombies now so fortunately for our guy, he is still aware but though dead but this won't stop him from ending the Zombie Apocalypse from all over the world, starting with this place! Let's use the arrow keys in order to go in any direction you want, forwards or backwards, and of course, you have to use the Z key in order to shoot with your machine gun, with not unlimited bullets but if you will use them rightly, there won't be any problem for you left! Your hero won't get scared by any of these walking dolls so let's start the killing adventure. This time, there won't be that easy because the zombies, once they are down, they won't die forever so after a while, they will come back up and start chasing your over and over again so avoid advancing so fast because if you do this, the zombies could attack you from both sides, backwards or forwards. Advance only when you are sure that you've killed each zombie so good luck!

Use the arrow keys, Z key