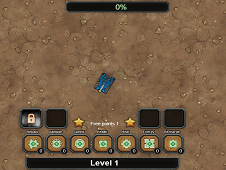 MudWars is just another IO online adventure, often met by you in the last period of time so this shooting and war adventure won't be something really special for you, but an ordinary thing, which will give you some real feelings and strong emotions because you will be the master or the war, if you can successfully get through all these missions with no problem, and without getting killed by the other opponents, online players, of course, because as you know, it is a io game! At the beginning of the game, it will be pretty difficult because you will get a low speed and you won't have any good features, only standars ones so you have to dig tunnels, as many of them as it is possible for earning money and the most importantly, experience! Avoid getting killed by your enemies and find them where they hide themselves, inside of some tunnel built up by them and this way you will be able to level up so soon! If you don't make these things, it will be pretty difficult for you to do that so let's get to the work right now, fighting in the mud! Also collect the gold and win speed, accuracy and power, of course and you can later even customize your tank!