Elena of Avalor at Spa 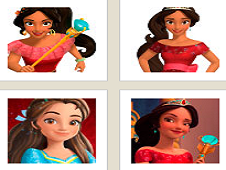 What is Elena of Avalor Memory Match?

Elena of Avalor is the latest kids cartoon added bu Disney Company on Disney Chanel. Elena is a teenager princess with friends and a sister but after her parents died, she has to defend her kingdom and she has to become of course the leader of Avalor. She is helped by Mings to defend Avalor and to fight with Shuriki because he is a bad wizard and he wants to destroy Avalor. Now we will talk about the latest game that we added today in this category. The game is called Elena of Avalor Memory Match and this game is a memory game including cards and you will have to click with the mouse on them and to find all the pairs. This game in the beginning is a little bit hard but you will see that after playing this game more that twice, it will become easier and you will love playing it. We hope that you like our games and this is why we invite you to play more and more games on our website called play-games.com and of course if you liked it we are waiting for you to give us a feedback. Good luck!