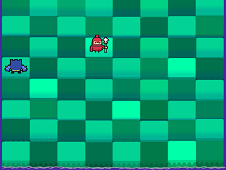 Do you know how to play Chess, right? Well, this fantastic and so cool game, named Anti-Chess can easily tell you what you should do, judging even by the name of it from the title. First of all, you have to know that using the mouse will be so necessary for you in this kind of Chess online game, where you will compete against so many other only players. The goal is to sacrifice all your Chess pieces in the shortest time possible, getting rid of them by getting in the mouth of your opponent, letting them kill you from a single move. It sounds easy because it is, technically, the opposite of a Chess game but you won't have always the chance to put yourself in danger but unfortunately for you, sometimes, you need attack. So focus on sacrificing more pieces than your opponent, trying firstly the training mode and then try a game against the computer on the medium or high level and finally practice in some serious matches, playing against some online players. Go for it right now and boast for your amazing skills and abilities of thinking and put up the greatest strategy ever possible. Do not let yourself fooled by the opponents' strategy and conquer them all!