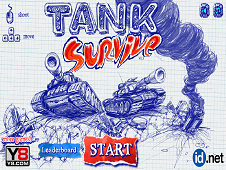 What is Tank Survive?

In Tank Surive you won't meet another tanks with the desire of ceasing from their permanent attack so you have to make sure that you will successfully use the mouse and the arrow keys in order to shoot the other tanks which are coming over and over again, without hesitating to kill them and destroy them all from a single shoot, or maybe from more if you meet bigger ones. However, the point is that you need to kill them all before you get killed by them so prove that you are the best and you can rezist for such a long time inside this battlefield, without dying or betting blown up. Move around there using the arrow keys or the A, S, D, W keys and the mouse for shooting so prove that you are the best and you can successfully kill them all, avoiding and dodging their missiles meant to kill you forever. There will be so many kinds of tanks and they will appear as you advance in levels so there will appear some monsters of tanks which can shoot with two missiles at the same time so the mission will be even more difficult for you. You only have 5 lives per level so with each crash or missile which touched you, you've lost one!