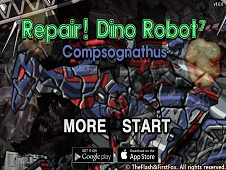 What is Dino Robot Repair Compsognathus?

Dino Robot Repair series has brought to you the latest version of its own game, a fantastic building up game where you have to put head to head some steel pieces which belong to a special and so damaged dino robot, Compsognathus, which has been so much damaged in the last period, in the last battle it had against the other dino robots. This is not an assembling game, so keep this in your mind so make sure that you will indicate successfully the instructions you will receive from this incredible game, with some auxiliary arrows which will indicates to you the right place where you should press anytime. This robot, most likely built by you so much time ago, has suffered a terrible injury in his fights and now it is going to lose his forehead place in it's kingdom so make sure that you will repair it with no problems and this way you will stop all the enemis who dared to damage it. Start with washing it and its damaged steel pieces, then start by fixing them over and over again, crafting another ones and making straight some crashed steel pieces and finally replace all the items from its body, one by one, for making sure that you won't make a mistake!