Fit in The Hole 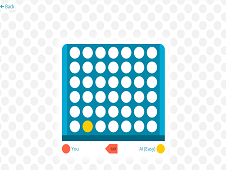 What is C4 Arena?

C4 Arena is such a great logical game and ability one, where you have to put head to head so many colored circles in order to make sure that you will fill all the empty circles from this game. The purpose is simple so you have to place at least four of the same colour next to each other in any direction or even diagonally. Until here, everything seems to be alright and pretty easy but now, here it comes the great side because you will play against an online player or against the PC so you will have each of you a move in a row. Make sure that you will focus a half on building up your row or column of four of the same type circles and then, also focus on the other half in order to make sure that your opponent won't build up his before you do, because this means you've instantly lost! Good luck and spread your eyes and sight so well, accomplishing this circles filling game in this arena! Go for it as soon as it is possible and try to make your opponent dizzy, running out of moves, and this way you will be successfully able to build up your four row of the same circles!