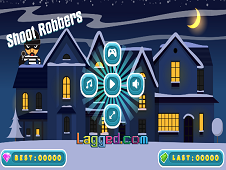 What is Shoot Robbers ?

Such a big house, a kind of palace but which belongs to someone, has been robbed by some monsters of people, some really heartless and bad guys whose only purpose is to kill and steal in order to make sure that they are fine and they have no problem in their lives. Make sure that you won't let them do whatever they wanna do in this house and there is only one way to stop them from this assault, killing them. They would finally get what they deserved so let's become the number one shooter in the world! Aim with your trigger and then shoot but only in the moment you are sure that you saw them successfully so let's get to the work right now, before there will be too late! Aim and shoot and you will kill them from a single bullet if you catch them and avoid getting hit by them, because after some bullets, you will be dead instantly, losing the level and implicit the whole game. Good luck and have so much fun while you are playing this incredible and so cool shooting accuracy game and become the robbers' killer! Go for it now and do not hesitate to impress with your amazing shooting skills!