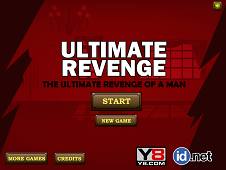 What is Ultimate Revenge ?

Ultimate Revenge is the fantastic vengeance time for this special guy, whose relatives have been killed in a mutliple crime by his former competitor in the crimes and now, his goal is to kill them all for the sake of his family's honour and peace. There will come so many bandits and so many killers to you, with muscles and everything but your goal is to slice them in order to give your dead family's peace again! There will be some weapons too, not only knives which could be used by you in order to kill those bandits and bad guys so hurry up and do not forget that it is so important to get rid of a gang as soon as it is possible, in order be easier for you to destroy them. From time to time, you will be able to use a super power so it will be easier for you to kill them in this kind of abandoned storehouse. In each gang there will be some guys bigger than you and the rest of the people so they wull be harder to kill but watch out to do not get killed. From each killed body, you can receive a medical pack in order to heal and keep the distance from them when you have a low HP and kill them all as soon as possible!