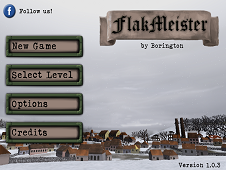 An awesome shooting game, which brings you the opportunity to launch so many missiles and this kind of hard steel projectiles to the skies in order to destroy and kill every single plan which is flying there, with no other issue. First of all, you have to know that you need to be so exactly so using the cursor of the mouse which will be turned in an aiming tool, you have to aim and shoot with missiles those planes as soon as possible. You have the role to defend your city so all the citizen's lives depends on you and on your incredible shooting skills and abilities. Make sure that, following the radar in the bottom side of the game screen, you will aim with your cannon straight the red dots on the radar, because they are your enemies. Get rid of all the enemies possible, which wanna destroy your town from the scratches so sooner you shoot them, sooner the danger will be out of your city. From the outskirts of your city, you have to aim them with your missiles cannon and the aim is rounded and pretty small so make sure that you will catch the planes in your target in order to rescue your city now! They will toss huge bombs and missiles to your city too so kill them before they kill you!