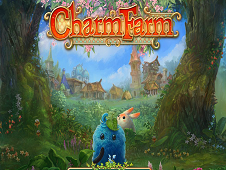 What is Charm Farm ?

Once upon a time, in this place where you will play right now, there was the greatest and so famous on those times Magic Forest! Kaya was reigning there for such a long time, alongside her beloved little helps and the rest of the population but Garp, the Evil monster has appeared one day and destroyed absolutely everything and now the dust and misery has filled the old Magic Forest. Kaya is alive and the majority from the population so let's help her and her friends to get back the fame and the glory of the Forest back in the following strategy and adventure game! Farm so many things in order to be able to get resources from the fertilizing soils from this magic world and make sure that you won't miss and skip a single detail. Figure it out what do you have to do rightly and pick up from the store, of course, so many resources which could be planted and do whatever else is necessary for helping Kaya restore everything from the scratches and then get away Garp from their lands. You will definitely do this because you have the support of another wizards from those lands because Kaya asked them too for help so you will be the greatest assistent for him too. Do you best and you will build up a Magical Empire back!