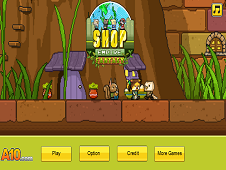 What is Shop Empire Fantasy?

Shop Empire Fantasty is such a great adventure where there are a lot of animals and different species of beings which aren't actually used with this kind of shopping in their empire so if you could build up so many shops and empire buildings there, the population is going to be so satisfied because there will be something new for them and this concept may bring you so much money, due to fact that there will be sold so many things which need to be purchased by the beings from there. Of course, after a while, the creatures and animals will become used with your single shop so they won't be as glad about it as before so make sure that you will build up more and more this kind of shops, investing the earned money from profit in order to build up many floors and some facilities like some stairs for making sure that the creatures which will try to get up there, at the next floors, won't have to deal with difficulties in getting up there. All of these, of course, will cost so much money so make sure that you won't invest them in vain, for some useless things but on important stuff. Good luck for the last time and make sure that this Empire will be full of your profitable shops!