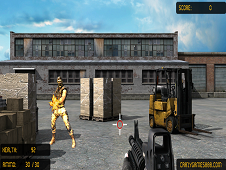 What is Counter Flash?

Counter Flash is a smaller version of the greatest ever shooting game, Counter Strike, where your goal is to kill as many terrorists are it is possible, without hesitating to become the greatest when it comes to this cool and so fantastic adventure. Before of all, you should know that now, in Counter Flash, you don't need to look for the terrorists in the whole map, but make sure that you will destroy them by only moving the aim and shooting them in the head if this is possible or anywhere, but do no let them touch you with their bullets. The movement isn't so complex so only shoot them right! They will get out of their hidden places and spots and suddently appear in your face closer or further, you need to shoot them all. Hold on for as long as it is possible, regardless of their higher number of players and do not get killed by them in any level. Ammo is limited and you need to adapt them for killing the necessary amount of terrorists for each level or you won't be able to get to the next mission, involving a new map with new challenges for you!