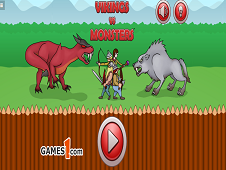 What is Vikings vs Monsters?

Vikings vs Monsters is such a great and so cool shooting and fighting game, without actually the high tech weapons but with some traditional ones from the period when the vikings were reigning over those lands! These vikings are really powerful and they know exactly what to do in this kind of situation so let's start and ambush as soon as possible, killing all of those monster who have just dared to step on your lands! Shoot them with arrows, hit them with some axes swings and even with some ice bold shoot and as you kill them, you will unlock new abilities, which will take more and more from the monsters' hp! At some point, if you do not kill them soon enough, they will also get their chance to strike so their claws are so powerful so it's enough a single claw strike in order to produce some pretty big damages to the victim so avoid getting slaughtered with any of your characters by those monsters! Good luck and killing them, you will unlock new powers, striking ones but also you need to focus sometimes on the defending skills so click on them in order to heal yourself soon!