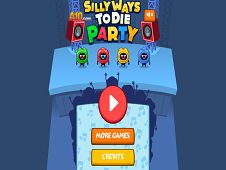 What is Silly Ways to Die Party?

The awesome and so funny characters from Silly Ways to die has prepared to you something really cool and adventurous to try so let's get to the work as soon as possible and start catching the balls tossing by them in the middle of the wildest party they've ever tossed! They have decided that it's high time for a great party so let's rock them all! Your task in this mission is to use the mouse in order to click on the right cirlces in the bottom side of the game screen, which will be different colored. There will be a green, a red, a yellow and a blue circle, under the same colored characters from the awesome Silly Ways to Die series so they will throw some balls to the circles, in the same colours they've got so the goal is to click on the circle when the falling ball reaches next to it in order to get collected by the circle. Everything sounds pretty easy until now, but the difficult part is that the balls are falling down together with different speeds so you have to adapt to the siutation and miss as few as it is possible of them! If you miss too many from a single character, it will start burning to you've lost the game instantly! Good luck once again and be so skilled!